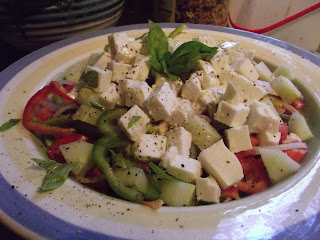 This, my friends, was a coup d'etat... we have  our discussion group out at La Vista Ecological Center on a Thursday night.  Sometimes we have a potluck, sometimes someone brings snacks...it starts at 7 PM, and most of the members are scrambling home from work to hurry and clean up and get out there. I usually fix something for the Irishman to eat in the car as I drive us, because he doesn't get home until 6 and we have to leave by 6:30 at the latest in order to be on time.
I was looking around my kitchen this Thursday past, and saw that I had a lot of really ripe beautiful red tomatoes on the counter that needed using. So I thought I would make a quick salad to throw together and take for everyone. The Irishman is not a big fan of raw tomatoes, so I fixed him up a dish of leftover spring rolls and Thai rice noodles.
The first thing I did, was go to the garden and hunt down a cucumber or two.  I picked some red and green bell peppers too. I had a nice chunk of fresh mozzarella in the fridge. I had edamame in the freezer.
I assembled the ingredients (or most of them) 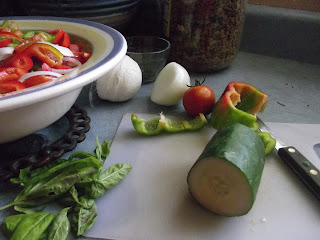 Red RIPE tomatoes
Cucumber, peeled and cut into chunks
Thinly sliced white onion
Red and green bell peppers, cut into thin rings
Edamame beans, rinsed
Fresh basil leaves, chopped (I have a pot of herbs on my deck--I also used a couple of center sprigs for garnish)
Soft fresh mozzarella, cut into cubes
Red wine vinegar
EVOO (extra virgin olive oil--organic if you have it)
Then I just layered the ingredients, starting with tomatoes until the bowl was full. Just before the cheese layer, I liberally sprinkled the salad with sea salt and fresh ground black pepper. Then I put on the vinegar and oil. Then the cheese.  The layered again the same way. I topped it off with a grind of pepper and the cheese and  the pretty basil.  VOILA! 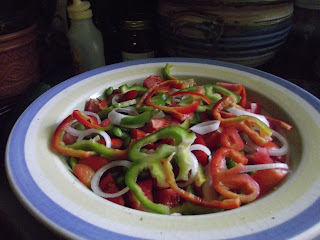 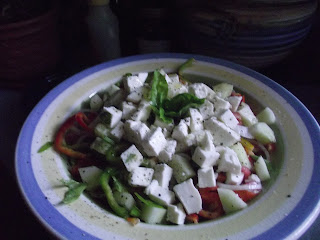 It all turned out really yummy.  I had a couple of french baguettes, so I thought and thought..and came up with the idea of crostini for a partner to the salad. I sliced the bread about 1 inch thick. Then I took my big cast iron skillet and put some olive oil in it. I minced garlic, heated the oil, threw the garlic in and then took the slices of bread and put them in. I turned them over, salt and peppered them, and let the olive oil/garlic soak in, then added a little more olive oil and cooked them until they were a golden brown. It took a couple of skilletfulls to get them all done, and I had to keep adding olive oil and garlic, and spooning out the garlic that got too done, because it gets really bitter, and NOBODY wants to eat that. lol
Here's what it looked liked when it was finished: 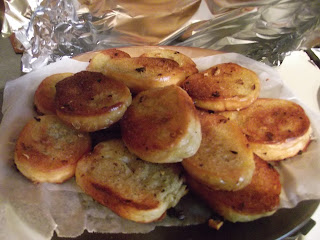 And I'm here to tell you..it was goooooooooooood.  lol  I brought home a little salad and NO bread when all was said and done.  The crostini was toasty on the outsides and soft in the middle.

This makes a great lunch or hot summer night supper. The next morning, I had leftover salad with my scrambled eggs.  Mmmmmm....  I love stuff like this, don't you??  I like it even more, knowing that I grew, organically, almost all the ingredients in it.  If I had had the time and air conditioning to have made the baguettes myself, it would have been even better. Do you have a favorite dish that you make??  Tell me !!!
Bon Apetit!~
Posted by Akannie at 2:38 PM 10 comments: 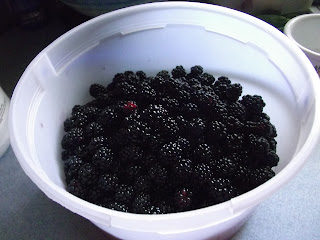 And it all started with this.
The blackberries were grand this year. They came and went pretty fast this year because of the drought and blistering heat, but when you live like we do, you make hay while the sun shines.  So I picked and picked like a madwoman for a couple of weeks, battling 100+ temps and heat stroke.
Then came the lettuce, which wasn't much of a chore, actually. Just picked and ate, and the 2 types we planted stored really well in the fridge.  It was a Mignonette Bronze and Red Romaine.  They were beautiful, and even in the extreme heat, took a LONG time to finally bolt. 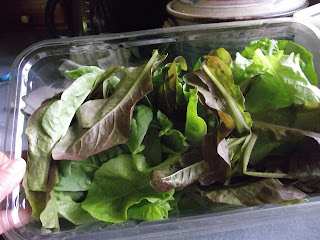 Isn't it gorgeous? We've just planted our second planting of it...no point in trying to plant anything earlier, but the heat has finally gone away. We've also got green beans in the dirt (3-4 inches tall already) and kale and carrots and  radishes and beets. 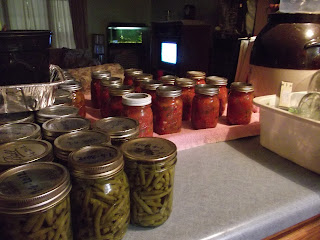 I canned quite a bit of green beans and salsa, as you can see here. 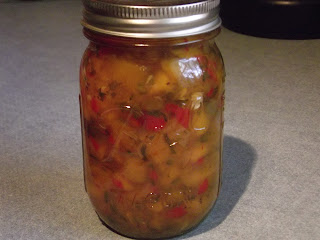 I canned a batch of peach salsa and a big batch of peach jam when the peaches came in. Unfortunately a few other things were coming in too, so I decided to just freeze the rest of the peaches, figured I can make more salsa and jam later, when I'm not so busy.
And, on July 21st, we got our very first pullet egg!!  It's next to an egg from the big birds for size comparison. 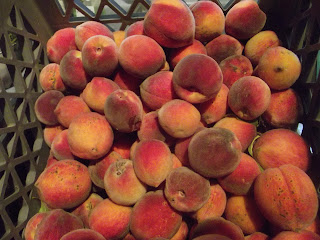 As you can see, our 2 little peach trees did well for us this year. 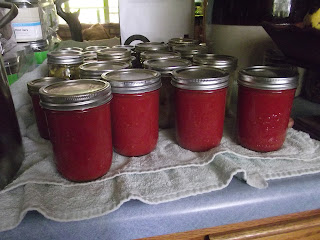 In addition to the salsa, I canned tomato sauce and whole tomatoes this year, and dried a ton. I still have tomatoes out there, but the ripening process is slowing down with the cooler temps. 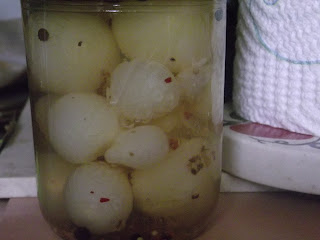 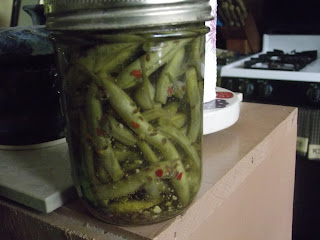 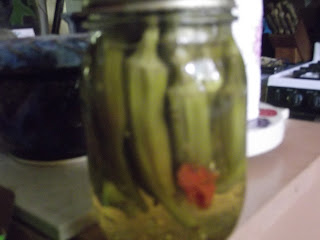 I pickled baby onions, green beans and okra too.  Lots and lots of okra....lol

We had a decent enough potato harvest, considering the drought. In the neighborhood of 50 pounds altogether.  We also harvested 14 butternut squash, and there are a few more out there that are late bloomers.  Today the Irishman picked about half the apples out on the tree, and it's about  2 bushel. My plan for those bad boys is storing most of them and drying the rest. I still have applesauce coming out the wazoo from 2 years ago.
So far, with 2/3 of the bed finished, I have frozen about 5 quarts of edamame. And the plants that are left are loaded, just a variety that matures later than the others. The quinoa experiment...well...it got knocked down by a storm and we are pulling it up by the roots soon and hanging it in the garage to dry.  I'm not sure if it's really ready, some of the seed heads look more full and seedy than others. We'll see.
I have started harvesting some of the lemon grass...drying the big leaves for tea, and found a link today to freezing herbs in olive oil, which I am going to try with some of the stalks. I thought I would also do some of the mint and basil that way, but most of the herbs--oregano, mint, basil, thyme, sage, and rosemary, will be dried.
I dried 25 pounds of red onions and about 10 pounds of button mushrooms too.  And some summer squash slices for soups. And some okra and tomatoes.  I will be drying some apples still and even dried some peach slices to see how that would work. Great!  lol  And I almost forgot that I dried 10 pounds of sweet cherries too.
~*~*~*~*~*~*~*~*~*~*~*~*~*~*
So you can see that I have been hard at it.  Tonight I made a lovely Thai rice noodle dish and some spring rolls, and will post that recipe tomorrow. It was delicious!
So I will say goodnight now, and come back tomorrow and post that recipe, between working on that big bunch of apples that are sitting in my kitchen....
Bon Apetit!