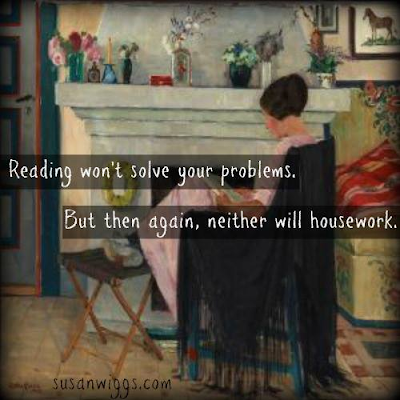 I have a couple of different books going right now.  And zero housework. Need to vacuum. Might do it today, might not. Got up at the butt crack of dawn and took himself to work to keep the car, ostensibly to attend a memorial (?) meeting for my friend that died yesterday. Once I got back home this morning, I decided that I really don't want to go. I don't want to see a bunch of people that may or may not be hurting as much as I am over the loss. I prefer to grieve in solitude... have always been like this. I rarely attend funerals or memorial services in funeral homes or churches,  unless I need to be there to hold up someone I love that has suffered a major loss. I have my own ideas about death and dying. I don't believe in heaven or hell. I don't believe that God punishes people with life or death. I think it's just all part of the great cosmic scheme of things.  We are born, we live, we die.  Just like each year's garden. I like the idea of reincarnation, only because if I believe in a god, it's the god of second chances, who says, there-- let's try again.  And try to get it right this time. More to learn. I also believe that sometimes souls choose the time of their death, especially if there's been a cycle of physical or emotional pain they've subjected themselves to in this life. OR that maybe once the lesson here is learned, we are finished, and can go.  I like that idea a lot.  So... there will be another celebration of my friends life at a later date, when it is all not so raw, and I might attend that.  He knew me. He knows I am waffling about all this. And he's probably laughing his ass off.

So I had all these good intentions to regularly post here this year and it's already the middle of January and I missed December completely.  So much for good intentions.  It's a grey and rainy day here on Honeysuckle Hill and I am doing some laundry and looking through local grocery ads.  Some good deals that I will go pick up. Mostly meats, as my freezer is getting low, and I have a little extra money.   I have not been buying much the past few months, but eating more out of the pantry and freezers and using what I have. Meat prices have come down on some things this week, and I found (in my town) the big 10# bags of chicken leg and thigh quarters for $.59/lb. AND boneless skinless chicken breasts for $1.99/lb.  We are still eating plant based meals about every other day and I will stick with that plan. I am also make meals that are meat incorporated instead of  a meat main dish.  Stretches the budget and is probably healthier. But every once in a while, I make a meat centered meal and it's so appreciated.  Last night I had a package with 2 huge chicken breasts that I sliced in half lengthwise and then pounded and put in an Italian dressing and lime juice marinade along with some jumbo shrimp.  They were very good and fork tender. Made some crispy potatoes that could have been better and some peas and that was supper.  I didn't feel like working too hard yesterday.  lol 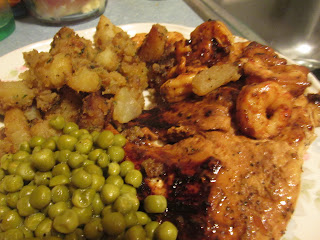 Must have been good, as he finished off everything.  lol  Today is Meatless Monday and so I am thinking about what to fix. Don't want tofu. Don't want pasta.  Yawn.  This weather has me thinking of lentils or split pea soup, both of which I love. A small batch with maybe one day of leftovers.  I don't want to be eating it for a week. I have enough time today to make some baquettes to go with. That sounds kinda good.  Split pea or lentils or Dal (I think I have some golden lentils).  Later in the week I will make some chili, maybe.  Temps are pretty warm this week. Heading for 60 today. Unseasonable so. But we'll take it after the Arctic weather we had earlier. My electric bill (and everyone else's) was sky high.  Over 500 dollars here after 425 the month before.  They're killing me.

So... maybe I'll make the lentils with coconut milk and Indian spices that I love for the aroma as much as the taste. It's a good rainy day dish. With some homemade baguettes. Maybe some salad, maybe not.  And a pie.  Cherry or pumpkin.   Hmmmm... 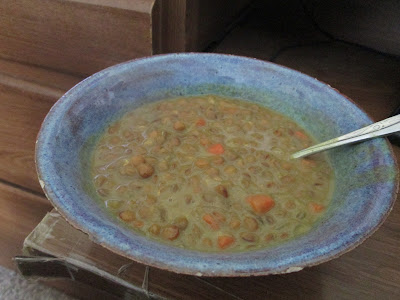 Please leave a comment ! I love hearing from you...